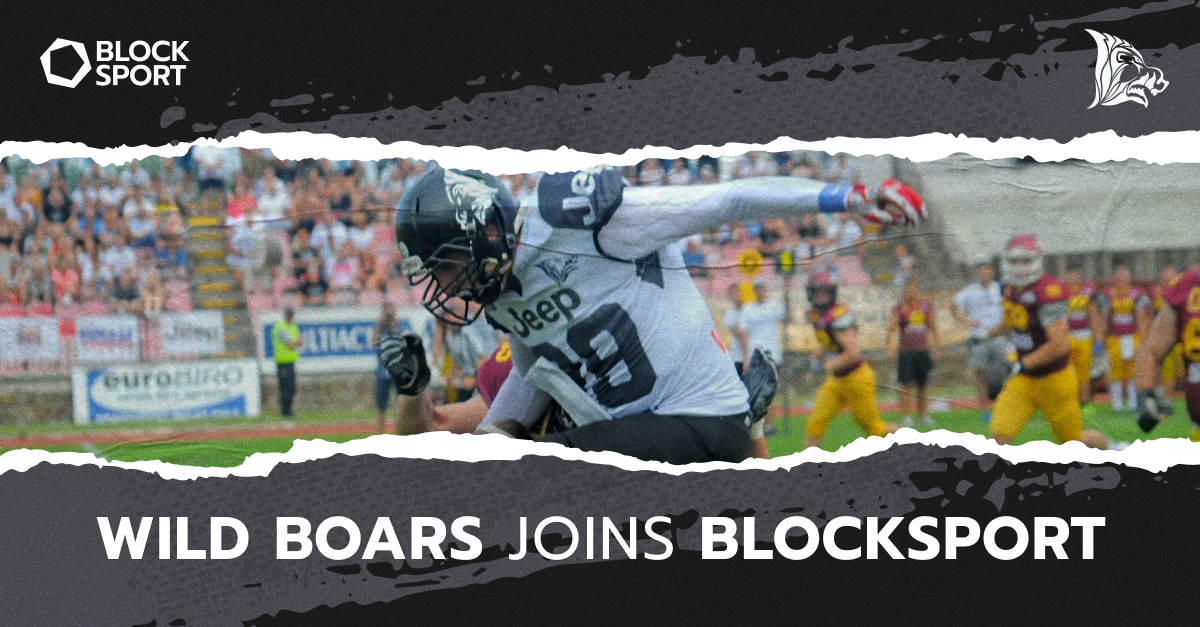 Kragujevac Wild Boars have been known for their consistency in building their organization. In the past few years, they’ve been a complete powerhouse of Serbia, and abroad. In 2017, they managed to reach the CEFL Bowl, however SWARCO was still a too big of a bite to take. It’s interesting to mention that the Wild Boars are the first ever CEFL champions (2006). Wild Boars have won seven national championships – 2004, 2006, 2008, 2009, 2010, 2016 and 2017, and participated in the final of the Serbian Cup in 2005. In 2011, they played the EFAF Cup finals in London against the London Blitz.

By signing this 5-year partnership, Kragujevac Wild Boars have become the first European American football club to go down the road of digitalisation and commercialisation which puts both them and Blocksport in the unique position of opening up a new sporting space and leading the way.

“Kragujevac Wild Boars is the club with rich history, the club with many national championships and the club that has huge aspirations both regionally and internationally. We are soon entering the CEFL (Central European Football League) Cup and will be competing against Czech, Polish and Hungarian champions and very much hope we will come on top of that major tournament. We have huge aspirations and historically have brought players and coaches from America, who all helped us to have raised the level of American football in Serbia and across the entire region of Central and Eastern Europe. Those included Larry Kentera, former coach of Arizona Sun Devils and Northern Arizona Lumberjacks. I am excited about this new journey and privileged to be a part of the history too!”

“We are very excited about this new partnership and the new sporting arena Blocksport is entering. We truly want to democratise, digitalise and commercialise the global sport and partnerships like this are hugely important to us. I very much look forward to what the future holds and cannot wait to see the launch of Wild Boars Fan App, as well as NFTs and Fan Tokens too in due course. ”

“Having signed a long term partnership with VK Partizan, it is great to see our entry into the new sport which in my view is massively undervalue and underrated and I am thankful to my local team and Marko Vujanac for spotting an opportunity here and taking a leap of faith to move in the direction that offers so much potential and so many opportunities and I very much look forward to the next steps.”

Kragujevac Wild Boars have been known for their consistency in building their organization. In the past few years, they have been a complete powerhouse in Serbia, and abroad. In 2017, they managed to reach the CEFL Bowl, however SWARCO was still a too big of a bite to take. It’s interesting to mention that the Wild Boars are the first ever CEFL champions (2006). The first steps of American football in Kragujevac were made in October 2002, when a group of enthusiasts in this sport, inspired by NFL broadcasts on the Third Channel of RTS, gathered to play the sport themselves. With the advent of Aleksandar Ćirić and Mladen Pavlović, it went to a higher level, in mid-August 2003, when the club was officially registered. Then, came the idea that the club will be called Wild Boars, according to an animal that is a symbol of the city. Previously, the club played the first match of the American football in Serbia, on March 22, 2003, in front of about 500 fans at the stadium of the Kragujevac Football Club Jadran, where the Wild Boars beat Belgrade’s Vukovi, 15:14. Even though the club did not win the title in the 2011 season, Wild Boars made the biggest club success in the history of this sport in Serbia, playing in the final of the EFAF Cup. After this season, the Boars took 10th place in the TOP 10 European teams. 2017 season was probably the most successful in clubs history. Defending the championship title and adding the seventh National championship trophy, Wild Boars made a comeback in a great way. In CEFL Bowl they were at the biggest test in the history of the Serbian club football team and, despite having had to satisfy the name of the vice-champion, they did not wear up against one of the most successful European clubs, Swarco Raiders, the triple champion of Europe, at a beautiful “Tivoli” stadium in Innsbruck. In the middle of the season, Wild Boars were on the list of TOP 10 teams of Europe, but after the defeat of Austrians they ended the year on the 16th position.