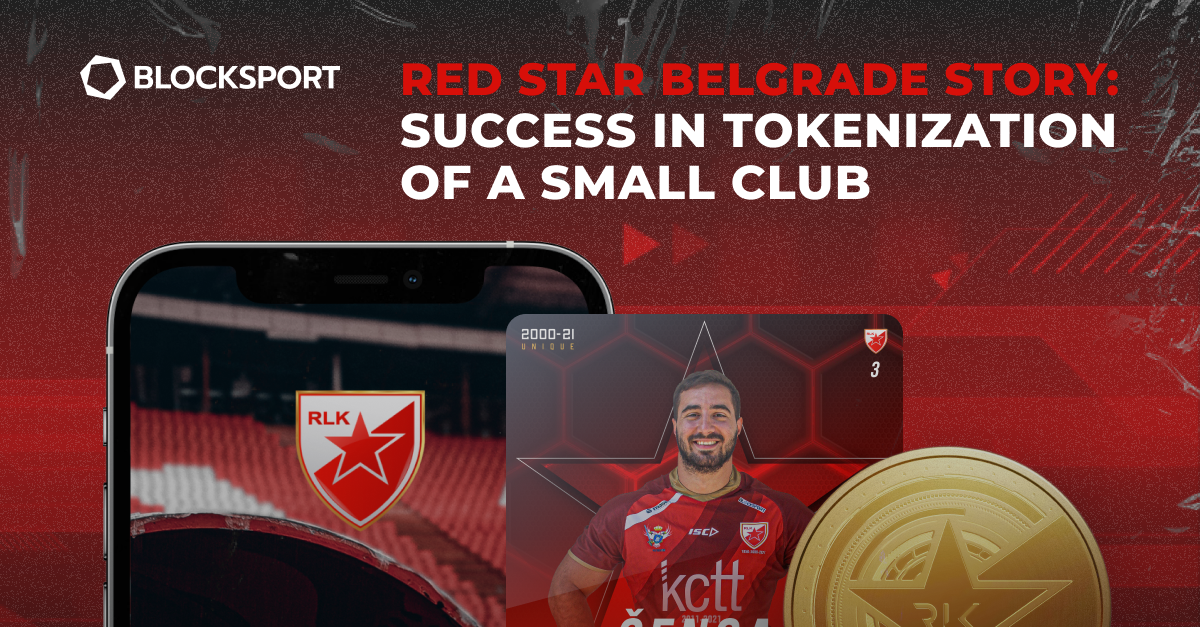 When we speak about digitalization and tokenization in sports – we always think about big clubs and brands, that launch millions of fan tokens, enter the metaverse, and do other enormous projects. But how can those tools help small sports brands right here and right now? How a club with a small and local fan base can digitalize the experience of fans and what is also important how can it open up a new revenue stream?

At Blocksport, we believe that the only thing that matters is the passion of your fan base, not the size, not the name, not the sports, not the league you play but passion and affinity for the brand. We know how to help small brands open up new revenue streams in the digital world, and how to help their passionate and loyal fans to experience a new level of connection and engagement with their beloved brand.

Red Star Belgrade Rugby League Club was one of the first partners of Blocksport in the traditional sports field. However, the name of the Red Star sports society is big in the Balkans and well-known in Europe. Rugby is far from the title of number one sport in Serbia and Red Star football and basketball teams are much more popular than their rugby counterpart, carrying the same world-famous name. But the important thing is the passion of this relatively small fan base of around 1000 people about rugby and Red Star.. They play on old fields, players have full-time jobs, and there is no VIP experience, but there are enthusiastic people behind the club.

We started our partnership with the launch of a mobile app on the SaaS model which is a good option for small clubs as they don’t have to spend thousands of dollars for development; instead just pay a monthly fee and receive a branded app inside a month. So here we started our journey with the Red Star fan app introducing gamification features and other options such as merchandise sales and live streaming. Since the beginning, the app was installed 1800 times, considering the active fan base of the club is around 1000.

The next step was the NFT launch when we introduced our native platform and released NFTs with Red Star players both on the platform and in-app. We sold 3 Red Star NFTs with promotion only on Red Star social media and in our community not spending a dollar on a paid promo. The NFT is a bonus for every club as it can be used as unique digital merchandise and the same vision we expressed with the Red Star club.

As our digital ecosystem presents 3 interconnected products: fan app, NFTs, and fan tokens. The last but not the least step was waiting ahead, as we mentioned many times before fan tokens are a revolutionary product that brings the connection between fans and clubs to a new level. Red Star fan token launch was the first one for Blocksport and also a debut for our partners from Serbia, regarding the size of a fan base we decided to launch the first tranche of 10 000 $RSB tokens with a price of 1 euro for 1 $RSB. Red Star offered some unique features for holders like unique content, Q&A with players, and discounts from clubs and partners. We launched a promotion on the Red Star app and social media, in rugby digital media, and on Blocksport social media channels. For less than a month we sold out the first 10000 tokens and received 10 000 euros just for providing some digital extras for their fans. On average every fan bought 145 tokens. That’s what Colin Kleyweg, CEO of Red Star Belgrade RLC said about this experience:

“I am proud of what has happened with the first tranche of RLK fan tokens. We are getting a wide cross-section of members purchasing stakes in the token. Given we are the first rugby club in the world to successfully launch a token, I think we also need to applaud the bravery of our partnership with Blocksport and the bravery of our fans in purchasing something so new. The job has just begun – our fan membership token is a way to develop a further conversation on our app and bring our members closer to the coalface of running a rugby league club and expanding the sport in a holistic, domestic competition structure in the Balkans.”

Now we are planning to launch the second tranche of fan tokens as the first success was a great addition to a club that always needs additional funds to pay more to the players, to play on better fields, and attract more people to become rugby and Red Star fans. That’s the idea of Blocksport if you have even 1000 people who are passionate and enthusiastic about your club then we have to work to help you find new possibilities using the unique digital ecosystem. Digitalization and tokenization are for every sports brand that has fans and their passion behind it. That’s what we believe in and that’s what we can confidently prove to anyone out there who is considering their own steps in the digital realm arena.