KRU AND BLOCKSPORT: TECHNOLOGY IN SERVICE OF KENYAN RUGBY AND COMPLETELY NEW WAY OF FAN ENGAGEMENT 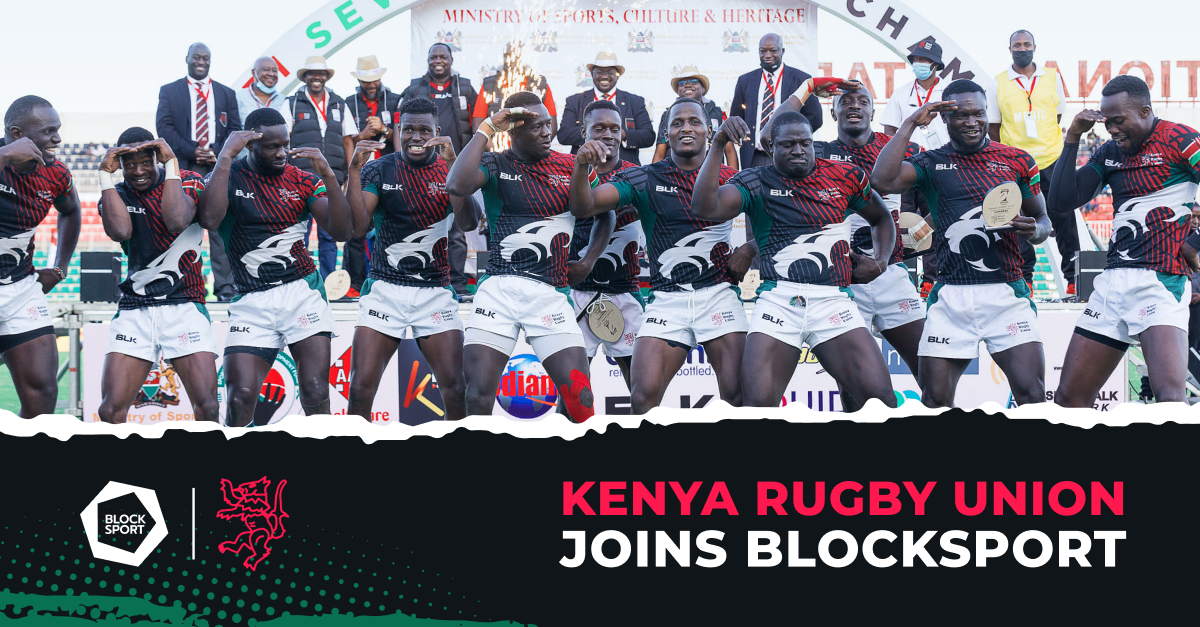 Kenya Rugby Union has signed a 5-year partnership BLOCKSPORT AG, a leading  Swiss sports tech solutions provider, to create the full digital ecosystem with the launch Fan Engagement App, Fan Token and NFTs as World’s first rugby union to fully embrace the power of blockchain technology and tokenization for the benefit of  the Kenyan rugby and Kenyan sport as a whole. This is the world’s first when it comes down to the entire digital ecosystem as many rugby and other sports unions have opted for a silo effect by signing up with multiple partners in a way that does not connect the dots.

By signing this 5-year partnership, KRU has positioned itself as the first rugby federation in the world to fully embrace the power of blockchain technology,  digitalisation, and tokenization. The partnership aims to develop new digital ways for  fans to be more involved with the national team starting with the launch of a new  interactive app for fans which will see engagement and digitalization go beyond the borders of Kenya and the African continent. It will be followed by the launch  and release of KRU’s NFTs, as well the national team’s own Fan Tokens which will be  utility based, hence totally non speculative. The Kenya national rugby union Sevens  Men team popularly known as the Shujaa have played at the past five Rugby  Sevens World Cups, reaching the semi-finals in 2009 and 2013, and are one of the  core teams competing in every tournament of the annual World Sevens Series. Just  last week, the Lionesses put up a spirited fight in the World Sevens Challenger  Tournament in Chile emerging fourth and continuing to win many global fans for  their scintillating display. The Simbas (Men’s Fifteen-a-side) were runner-up in the  Rugby Africa Cup and are now preparing for the Final Qualification Tournament for

next year’s Rugby World Cup in France. Early this year, the Simbas made their debut  appearance at the Currie Cup First Division competition in South Africa, one of the  oldest and most prestigious rugby tournaments in the world. These teams have won  many global fans with their exceptional displays despite limited resources. This  partnership opens new platforms for the global fan base that the Kenyan national  teams have attracted to consistently engage with the teams and players while  allowing the KRU to fully exploit emerging commercial opportunities for the benefit  of the game.

While trading fan tokens might be great, Blocksport brings something a little different  to the table. It is currently the only company that offers non-speculative utility fan  tokens, specifically designed to drive real fan engagement. Several top-tier clubs and unions are leveraging these tokens to create digital memberships that give fans  exclusive perks depending on their membership level. Fans get real value and  engagement based on their level, while teams get to build loyalty and cash in on  new revenue streams.

“I am honoured and proud with the fact the Kenya Rugby Union will be the first  rugby federation in the world with a fully completed digital ecosystem which will not  only benefit our national teams but our club rugby fans too. You often read in the  press how American, Asian, English, German sports leagues and federations go  ahead of the curve in this space and announce commercial arrangements that  further benefit their already well run and funded sports infrastructure. However I feel  this is a turnaround for this part of the world, which has historically been full of  potential and talent, The KRU has recognised this potential and is prepared to open  up new frontiers in the digital space which in return will make us stand out from the  crowd and attract investment not only into our rugby industry but our athletes too. I  would like to thank my team for working relentlessly over the past few months and  bringing this solution based out of Switzerland and the world’s most regulated and  transparent crypto valley, Zug, to our attention. I very much look forward to the next  steps and the journey ahead.” We are humbled and grateful that Blocksport has  agreed to work with the KRU in this transformative project.

“I am very excited about the fact that we are breaking into the African sports  market with such an African rugby heavyweight, the Kenya Rugby Union. From the  moment I met the KRU team and its Chairman Mr Oduor Gangla, it was evident to  me that they understood the true potential blockchain technology brings to the  table. They also recognised the fact that Blocksport was a different kind of sports

tech company, a company that understood the sport in a different way to other  industry players. I can safely say that it is great to be talking the same language, i.e. us at Blocksport and our new partner, KRU. As a former Chairman of a football club, I  often talk about the importance of one’s fan base and how much more fans today  expect of their beloved clubs and national teams in all major professional sports and  it is great to meet like-minded individuals operating and managing globally  successful rugby teams such as the Simbas, Shujaa, Lionesses and Chipu. We are  looking forward to many more successful partnerships in Africa and are thrilled with  the partner we are starting our African journey with. And what a great timing to do

so, with a serious chance of the Simbas competing at the next Rugby World Cup in  France as well as the Shujaa participating in this year’s Rugby 7s World Cup in Cape  Town, South Africa. ”

The Future Is Now: Generation Y and Z are the new faces of fandom. Understanding  their needs and tailoring one’s brand for the digital realm presents new opportunities  for engagement. It is the key to making them feel more connected to one’s club,  national team and the chosen sport. When fans are happy, it is also a victory for the  club or national team they support. Blockchain gives sports clubs, leagues and  football and other sports associations the chance to do just that.

At the crux of every sporting organization is its fanbase. It is the fan who buys the  tickets to watch the games, it is the fan who buys your merchandise, it is the fan who  invest in the organization. From the inception of our relationship with Kenya Rugby Union, it has been apparent that they have wanted to commercialise their assets,  and they have realized that the way to do this is putting the fan at the centre. This  partnership with Blocksport is timely and natural, in my opinion. Building a fan  engagement app for a Union that has a global fanbase is incredible, and we look  forward to this partnership. We want to thank Lindi Ngwenya and Charles Cardovillis,

together with the teams at Kenya Rugby Union and Blocksport for making this a  reality. The next 5 years will definitely be an exciting time for Kenya Rugby.

Kenya Rugby Union (KRU) is the governing body for rugby union in Kenya. It was  founded in 1970 and is affiliated to Rugby Africa and the international governing  body World Rugby. KRU is responsible for the running of the Kenya national rugby  union teams (Lionesses, Shujaa, Chipu and Simbas), domestic club’s competitions and school rugby competitions. The union’s current residence is at the RFUEA  Grounds in Nairobi, Kenya. KRU currently comprises of 3 leagues, the Kenya Cup, the  Championship and the Nationwide. The KRU also hosts the prestigious international  invitiatonal tournament, the Safari Sevens.